It is possible to reserve areas in a lot of museums in Marseille, prestigious places for original events which will surprise your guests. Since its creation, the MuCEM has offered to the entreprises spaces in which to organize special events. The VIP room can accommodate up to 50 persons, and the auditorium up to 329 persons. The forum is ideal for exhibitions, coffee breaks, and lunch buffets. Whether it is for a meeting or a congress, the MuCEM is an emblematic place of Marseille.
Website
• The Regards de Provence Museum
Ideally located, it offers an exceptional panoramic view of the Joliette port and J4 esplanade (MuCEM and Villa Méditerranée).
Labeled “Heritage of the 20th Century“, it provides an exhibition room (from 200 to 400 m²) for seminars and evening cocktail parties, surrounded by artistic treasures. It can accommodate 2OO persons for dinner, and 300 for cocktails.
Website 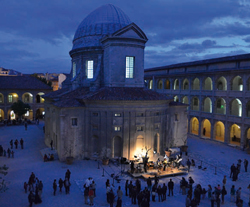 • The Vieille Charité
Located near the Major Cathedral, its construction began in 1670 on the initiative Pierre Puget, the King’s architect, and a child of the Panier neighborhood. It was originally designed for the ”beggars“ of the city, then was later transformed into a hospice, and after in social housing by the army; today, after 25 years of construction work, it offers several multi-cultural structures.
It is possible to reserve: the chapel in the baroque style with its oval dome can accommodate up to 130 persons for cocktail parties; the open air courtyard for up to 1,000 persons; and the sound-proof conference room Le Miroir for up to 98 spectators.
Website 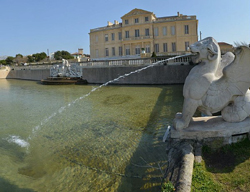 • The Borély Castle and its Museum of Decorative Arts
It is dated from the second half of the 18th century and belonged to the Borély family, successful traders having official functions in the service of the King of France. Its Des Pas Perdus room of 130 m² and its entrance hall can accommodate 120 persons, and its courtyard of honor up to 1,000 persons.
Website
• The Contemporary Art Museum [mac]
Since 1994, the [mac] has obtained the statute of National Museum. World-renowned, it received the label of Museum of France in 2003. This edifice has a garden where we find contemporary art works. Its outdoor entrance courtyard of 300 m², and its lobby of 140 m² can accommodate up to 300 persons for cocktails.
Website
• The Cantini Museum
This mansion, built in 1694, is an ideal place because it is located downtown just a few minutes’ walk from the Vieux Port. Great lover of art Jules Cantini gave it to the city in 1916 to create a museum dedicated to the “modern“ period of the 20th Century (1900-1960). The entrance hall and its two rooms (155 m²), the courtyard, and the outdoor garden can accommodate up to 120 persons for cocktails.
Website

• The History of Marseille Museum
Created in 1983 close to the Vieux Port, the renovated History of Marseille Museum opened its doors again in 2013. The auditorium seats 200 spectators and the entrance hall can be used for cocktail parties.
Website
• The Longchamp Palace and the Museum of Fine Arts
The Longchamp Palace, which is none other than the water tower of the city, was bought in 1862. The Museum of Fine Arts is the oldest of Marseille and it was renovated for the year European Capital of the Culture. The right wing of the Longchamp Palace faces the Natural History Museum. The North colonnade and the dome (120 m² on the exterior) can accommodate up to 300 persons and the South colonnade up to 400 persons for cocktails.
Website
If you want to organize your next event in one of these artistic places, contact us and we will take care of everything, e.g. rental spaces, hotel bookings, catering and shuttles to get there.
marseille, idée, privatisation, musée, 2016
Previous Post
Christine : ” Une page se tourne “
Next Post
Event Prestige Agency