5 years ago
Webmaster
You are here!

Jean Nouvel, one of the most recognized French architects in the world (e.g. the Agbar Tower in Barcelona, ​​the Quai Branly Museum in Paris), has created the plans for the future second highest tower in Marseille, between the Arenc docks and La Joliette, in the perimeter of the Euroméditerranée area. 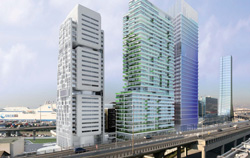 “La Marseillaise” 135 meter high tower of 31 levels over an area of ​​55,000 m², will be completed by mid 2018.
It will be occupied in particular by the CCIMP with the Marseille-Provence World Trade Center on two floors (29 and 30), 227 m² to install a business center and the Provence Business Sky Lounge. These two spaces with a breathtaking view over the harbor of Marseille will welcome national and international clients.
This avant-garde building with futuristic lines is intended to be the symbol of the renewal of Marseille.
“La Marseillaise” will be the first of three towers, with “H99” and “Horizon”, between the CMA CGM tower and the Silo. “H99” 100 meter high will include luxury apartments and “Horizon” with a height of 113 meters, will offer a hotel and tourist apartments.
They will change these former port areas, the Arenc docks, creating a skyline on this seafront and realizing the transformation of the Joliette sector. 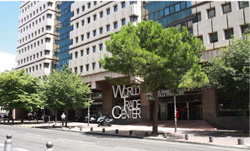 Last September, the World Trade Center (WTC), which we talked about in 2015, next to the Bourse Center, inaugurated the first part of its major modernization: the opening of a Georges V business space in Paris and the City Business Center on the 2nd floor of the current headquarters in Marseille.
The opening in mid 2018 of these prestigious offices in the previously mentioned tower will mark an end to this global project.
In addition to being a congress center (with 700 events per year), it is a business center (of 250 clients), and a language training center (in 13 languages) which welcomes 5,500 people every year, including some divine [id] staff.