Marseille’s famous starred chef Gérald Passedat has opened his latest restaurant Louison at the Domaine de Château La Coste in the heart of a 200-hectare vineyard.

This place of freedom and artistic discovery inspired a more earthy cuisine than usual, revealing a new facet of his talents.

Let’s go back to his early career. It all started at the Petit Nice Passedat. This is a family story. It was his grandfather who bought the villa in 1917. In 1954, his father took over this unique place overlooking the sea, with the Château d’If as a backdrop. He acquired his first star in 1977 and the second in 1981. Gérald Passedat succeeded his father in 1985 and obtained the third star in 2008. Gérald Passedat offers a generous cuisine totally dedicated to the Mediterranean and especially fish. 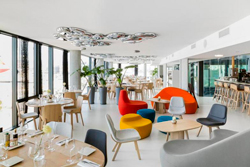 In 2013, he opened Le Môle, a panoramic design restaurant on the roof terrace of the MuCEM, with an exceptional view of the sea and the port. The chef proposes a chic, modern and creative bistro menu always inspired by the richness of the Mediterranean. We hosted there the SIFEM (Société d’Imagerie de la Femme) official dinner last June.

Albertine, in the heart of the Docks, is a more intimate restaurant that reveals another side of his cuisine, combining local food based on the land and the sea. A cuisine of the sun in a restaurant that is evocative of a family house. The cuisine offers an introduction to gourmet cuisine.

Where do you want to discover the culinary talents of Gérald Passedat? For your next event in Marseille, let us organize your gala dinner in one of these fantastic gourmet restaurants!